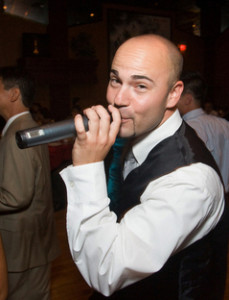 Ryan discovered a love for music and entertaining at a young age. Sometimes found sharing the stage with his father (a musician and recording artist) or more often found performing for his family in the living room using the household furniture as his stage. Sharing his father’s passion for music, Ryan started off listening to the classics (Sinatra, Elvis, The Beatles…) and over the years his love for music has grown and expanded over many genres.

Besides music he is a true movie buff at heart. This passion for the Arts led him to the theatre during high school. This is where he truly developed his ability to perform and speak in front of large audiences. He balanced his passion for the Arts with his love for Sports. Not only as a fan but as an athlete himself, playing Football, Baseball, and running Track.

He continued his love for Music and the Arts, along with Athletics throughout high school and college. This is where he began his professional career in the DJ industry. Ryan returned from his first year away at college to begin a summer job that would change his life forever. With the suggestion of a friend, he started working for one of New Jersey’s top DJ companies. After about 10 years, it was time to move on and that is when Prestige Entertainment became an idea. With the help of his best friend and co-owner it went from an idea to reality.

Ryan has unarguably earned a name for himself as a top MC/DJ in the industry. He has over 15 years of experience and has performed at hundreds of weddings and events. His charming good looks, smooth voice, and outgoing personality make him a favorite for any occasion. If you would like to book Ryan for your upcoming event, HURRY! He is very popular!

Weddings, Sweet 16's, Proms, Anniversaries, Birthdays, and so much more!